According to Swiss gem-testing laboratory SSEF Madagascar is the site of a new gem-rush, which over the past few months has produced an impressive amount of blue sapphires and fancy coloured sapphires of partly exceptional size and quality.  “The deposit appears to be a new gem source of greater importance than anything we have seen in recent years.”

Only a lab can tell the difference between these sapphires and those from Kashmir, according to SSEF. 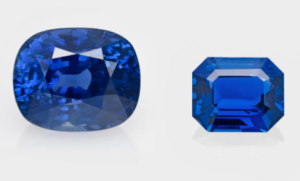 Two ‘Kashmir-like’ sapphires of exceptional size and quality from Madagascar. The stone at left is 30 carats, while the one at right is 13 carats.

KASHMIR:–The Sapphires of Kashmir form an exclusive class of their own. In the Jewel trade it is customary to attach the appellation ‘Kashmir’ to any fine Sapphire regardless of its geographical origin. This is an indication of the outstanding qualities of Kashmir Sapphires. The colour of these Sapphires resembles the beautiful hue of the peacock’s neck, a velvety blue. Even a small concentration of that fine colour illuminates the entire structure of the Gem. Today, with the exception of estate sales, fine Kashmir sapphires of true origin are virtually unobtainable.

We offer great sapphires, in many different sizes and qualities >>

About the Author: jp muff

WE ARE FULLY OPERATIONAL | Please note: Shop items are individually quoted upon your product enquiry due to current gold price fluctuations | Dismiss